GIMME ON A GREEN STREAK

By Carolyn Erasmus on November 7, 2019 in Uncategorized

(Article courtesy of Cape Breeders website) Varsfontein Stud’s red hot sire Gimmethegreenlight,  whose progeny have won graded races in South Africa the last two weekends running, was back in the limelight on Tuesday when his top-class son Yulong Prince won the Listed Furphy Plate over 1800 metres at Flemington on Melbourne Cup day.

Now in the care of trainer Chris Waller, the five-year-old entire came with a barnstorming finish from  last to first to give his trainer and  his jockey ,Nash Rawiller, a third success on the day.

Yulong Prince (SAF) benefited from a solid pace set by Runaway to overcome a checkered passage in the straight to defeat Looks Like Elvis by a long-head with So You Win a nose back in third.

It was a first Australian success for the Varsfontein Stud bred entire, who had finished fifth in the G3 Coongy Cup previously, and Yulong Prince holds entries for both the G1 Seppelt Mackinnon Stakes and G1 Kingston Town Classic.

Now a winner of seven of 18 starts, Yulong Prince (who raced in South Africa as Surcharge) was one of the best horses of his generation in South Africa, where he won six of only 11 starts, and downed such G1 stars as Do It Again and Tap O’ Noth when victorious in the 2018 G1 Daily News 2000.

He is one of 20 black type winners for his G1 L’Ormarins Queen’s Plate winning sire, with Gimmethegreenlight having been South Africa’s Leading First Crop Sire in 2015-2016.

The son of the bang in-form More Than Ready is the sire of nearly 50 black type horses in total, with the promise of plenty more to come! 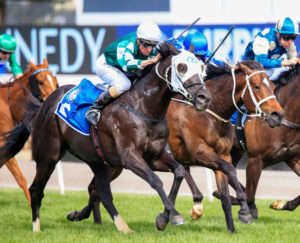